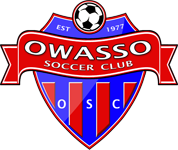 REGISTRATION:  Owasso Benefit Small-Sided Tournament uses Gotsoccer.com and is open to all US Soccer affiliates.

U6-U12 will play 4v4 on 40yd x 30yd fields. The goals are 4 ft. tall by 6 ft. wide. The goalmouth consists of an 5 ft. radius semi-circle crease in front of each goal. Games will consist of two 12-minute halves separated by a two minute halftime. There are no goalkeepers. U6-U8 teams use a size 3 ball while U9-U12 teams use a size 4 ball. Both teams should provide game ball.

U13-Adult will play 6v6 on 55yd x 30yd fields. The goals are 6ft. tall by 18ft. wide. The penalty boxes are 10 yards square. Games will consist of two 16 minute halves separated by a two minute halftime. U13-Adult teams use a size 5 ball. Both teams should provide game ball.

Special Coed Rules (Adult Only) A coed team may be made up of any combination of male and female players. However, during play, there must be at least 2 females on the field at one time.

HALF TIME PERIODS WILL BE 2 MINUTES IN LENGTH.

THERE WILL BE NO OVERTIME PLAYED IN PRELIMINARY MATCHES.

OVERTIME RULES: Games ending in tie will be considered a tie, except during playoffs, where there will be one (1) five-minute “sudden death” overtime period. A coin toss will decide kickoff and direction. The first team to score during that period will be declared the winner. If the game is still tied after the five minutes, penalty kicks will be taken to determine a winner. The players from each team that were on the field at the end of the overtime period will alternate taking the penalty kicks. The team that has scored the most penalty kicks at the end of the first round wins. If it is still tied at the end of the first round, the same players will rotate in a “sudden death” penalty kick format until a winner is decided.

In certain circumstances where there are less than four teams in any given age group or skill level, your team could be flighted to the next highest age group.

GAME TIMES / SCHEDULE: Teams must report to their scheduled field 15 minutes prior to game-time. A team will forfeit the game if not ready to play at the scheduled time, at the discretion of the referee or Tournament Director. It is the responsibility of the coach or team captain to check the schedule for any changes the Friday before and day of the tournament; you will not be notified of any changes.

TEAM UNIFORMS: All players must wear like jerseys during play. Home team must change in case of color conflict. The home team is the first team listed on the schedule. Shin Guards are mandatory.

No Slide Tackling except to stop or intercept the ball. Example: a player may slide to save a ball from going out of bounds. No contact can be made with the opposing players while sliding for the ball. If contact is made during a slide tackle it could warrant one yellow card based on the referee’s discretion.

Kick-Ins will be used in place of throw-ins.

Kick-Offs may be taken in any direction. You cannot score directly from a kick off (ball must be 100% over the mid-line to be considered on the offensive half of the field).

Dead Ball Restarts including corner kicks and fouls, are indirect. In all dead ball situations, defending players must stand at least five yards away from the ball. If the defensive player’s goal area is closer than five yards away, the ball shall be placed five yards from the goal crease in line with the place of the foul.

Substitutions may be made on any stoppage of play, except penalty kicks. Teams must gain the referees attention before making a substitution.

Owasso recommends, as “crease courtesy”, that coaches do NOT place a player on the crease edge throughout the duration of the game as a defensive strategy.

NO Crease Rule for 6v6 The crease rule is not used in the 6v6 game.

Teams will be awarded points using the following system:

Bracket Winners and Wildcards will be determined in the following priority:

A forfeit must be approved by the Tournament Director before the game is considered an official forfeit.

Substitutions may still take place, but the offending team will still be minus one player on the field. The player receiving the red card will automatically be suspended for their next game (NO EXCEPTIONS). Players, coaches, or parents whom are ejected by the referee must leave the complex and CAN NOT return for the remainder of the tournament to watch or play.

PROTESTS/DISPUTES: No protests will be allowed when referring to a Referee’s ‘judgment call’ and all games will be considered final in this circumstance. The Tournament Director will

resolve any situation not explicitly covered by the rules. The Tournament Director will also resolve

any “Rule Interpretation Violation” made by the Referee. Disputes relating to the interpretation of the rules will be resolved with the Administrator/Coaches that are registered with the involved

team(s) only. Individual parents or fans of the game may not represent a team if not registered as an Administrator/Coach with the involved team(s). If a Rule Interpretation Violation does occur a formal protest must be made by the Administrator/Coach of the team protesting before the games end.

Theme by Anders Noren — Up ↑